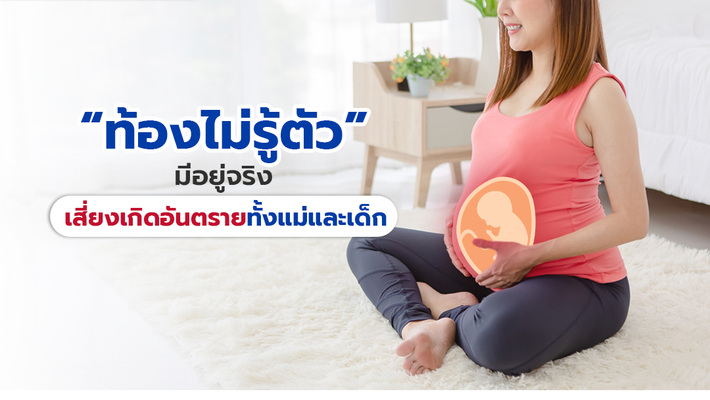 Unconscious pregnancy actually exists! Risk of harm to both mother and child.
Irregular periods that last longer than usual or feel like something is wriggling in your stomach. It could be a sign of an unconscious pregnancy that indicates that you are having a baby.

Unconscious pregnancy is often found in first-time mothers who do not know that they are pregnant. Most often, this is due to ineffective contraception or irregular periods that become normal because in the early stages of pregnancy there may be no symptoms. Therefore, you should regularly check your own health regularly.

Ratchasima Hospital has examples of dangerous symptoms and risks that may arise from pregnancy without knowing it for everyone.

Danger of miscarriage.
If the fetus is in an abnormal posture For example, the buttocks or the transverse position may reduce the chances of a successful birth. It is also dangerous to the mother and unborn child from accidents or excessive blood loss. If you are unable to roll back into the correct posture, a safe caesarean procedure is necessary.

Preeclampsia.
It is caused by abnormalities of the placenta inside the womb that cannot be implanted tightly, resulting in lack of oxygen and ischemia in some parts of the placenta. resulting in the secretion of certain toxins flow into the bloodstream of pregnant women who may have complications that are dangerous for the mother and the unborn child, such as pulmonary edema, acute renal failure, or making a small child grows more slowly than usual, if any

increase in violence may die in the womb.

Children are at risk of developing the disease.
Unconscious mothers often do not attach importance to diet. Resulting in high blood sugar levels and there may be an increased risk of developing diabetes, causing the unborn child to have complications that can lead to disability or death.

Ratchasima Hospital is ready to be beside all mothers closely at every moment. Welcome to consult and diagnose the symptoms of obstetrics and gynecology from a specialist doctor.

Next
Herbs to restore health after recovering from Covid-19